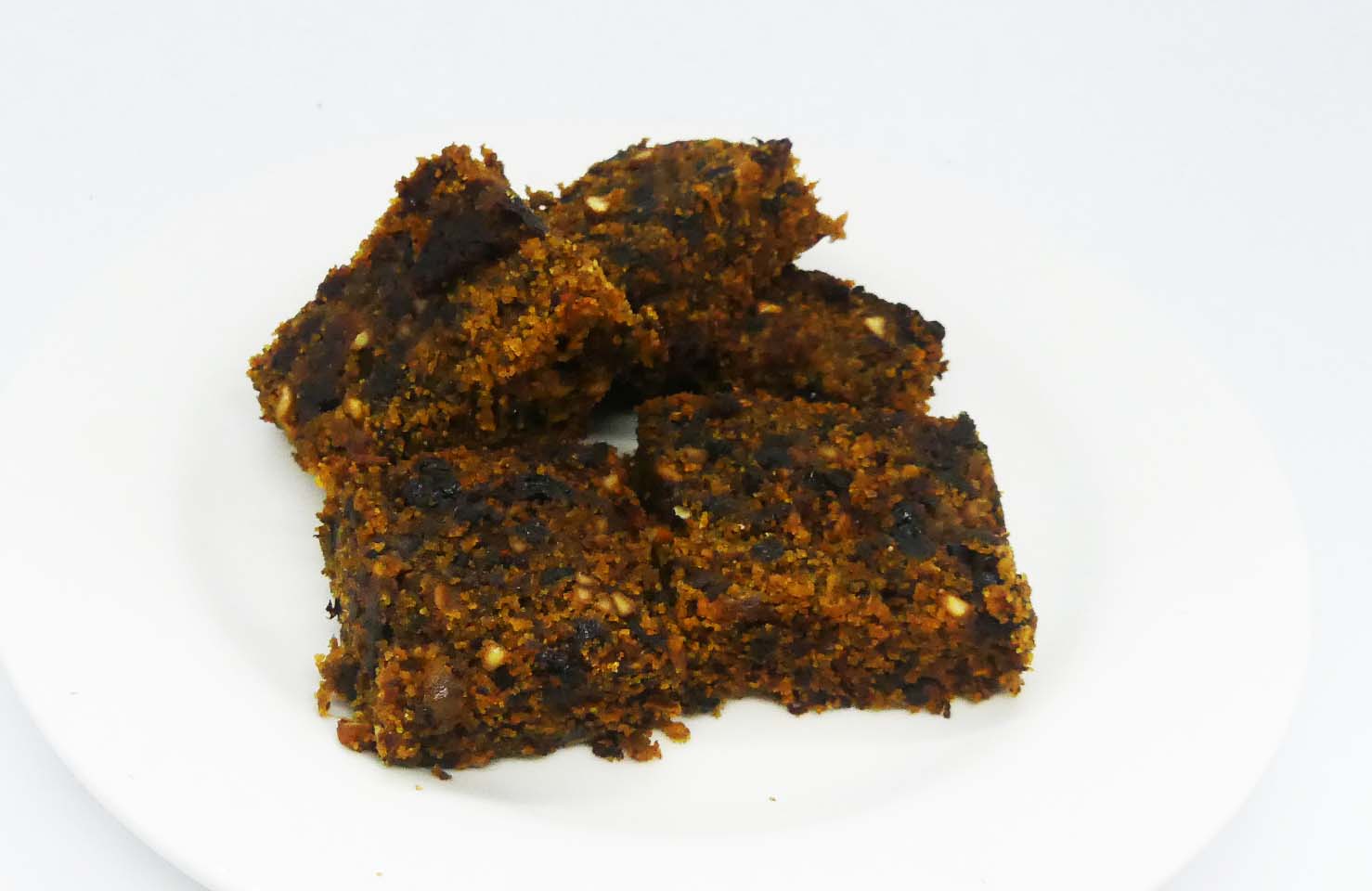 First prepare the fruit: stone and cut the raisins in three or four pieces: wash and stem the sultanas. Wash, pick and dry the currants.

It is 1959 and I am sitting cross-legged on the table in the back verandah of our house in Sri Lanka. I am seven years old and today my grandmother, Ada, our cook, Rosalind, and I will make the Christmas cake.

Rosalind has anchored to the table the cast iron hand mincer Ada has sensibly bought. Ada’s fingers have grown arthritic and cutting anything into small pieces is painful. I will inherit her arthritis and use an electric food – processor in later years..

Rosalind feeds the mincer with handfuls of the fruit, each in turn. As Rosalind cranks the mincer I watch, fascinated, as the fruits mix together into rich, brown worms extruded onto a plate. From time to time she presses the fruit down into the funnel of the mincer. I am terrified her fingers will get caught.

Rosalind has taken the thin raffia string from around some brown ceramic pots with bright coloured Chinese labels on top. The ginger is preserved in a thick, tangy, sugary syrup. The pumpkin comes as small, pale yellow, almost white cubes covered in white sugar. The chow chow, like the ginger, is in a thick syrup. I never stop to wonder back then why the pumpkin isn’t bright orange like the pumpkins Rosalind curries sometimes. I never stop to wonder what on earth chow chow is. I never stop to ask what these Chinese preserves are doing in a British fruitcake. I know nothing back then of the more than 500 years of Chinese silk traders living cheek-by-jowl with Sri Lankans in the crowded bazaar streets of Pettah. I am yet to realise how cultures and cuisines cross-fertilise through simple daily actions between people more deeply than through government policy – a plate of food passed over the wall, a piece of calico exchanged for two or three mangoes. I will later learn a term for this coined by the Australian social anthropologist Ghassan Hage: everyday multiculturalism. Right now, all I know is the goldenness of the preserves shining in the afternoon sun and the delicious pungency tingling my nose as the preserves also now are minced.

Shred the candied peel finely and chop the cajunuts. Mix the different kinds of fruit together with the flour. Put the butter and sugar into a large basin and beat well (1 hour) with a wooden spoon till very light and smooth.

In front of me on the kitchen table is the basin. It’s enormous, shallow but wide; brass, hand-beaten. You can run your palm around its gleaming inside and feel the dimpling from the mallet strokes that made it. I grasp the mixing ladle. It’s like a cudgel, a thick cylinder of dark smooth wood ending in a fat bulb. It’s easily as thick as my arm, but surprisingly light. This is my first job in the cake making: creaming the butter and sugar. The mixture is like sand at the shoreline on the beach: grainy and wet. I imagine the great sugar castle I could make from it.

As I stir, the mixture gets paler and sloppier, like the cream topping on the buns the bakers down the lane make. I am allowed to wander from the house for hours on end during the day. Sometimes I end up at the bakers’ watching the men in their sarongs and singlets playing card games and drinking whisky while the loaves bake. Is this where I begin to desire men? Certainly, there is something exciting about the sight of black hair fringing the top of the necks of singlets; the gleam of sweat on the bare arms; the way sarongs hang loosely open between their legs. But it’s all just feelings for which I have no words with which to make sense. But I sense what I am feeling is wrong and that’s enough for now.

Then add the egg yolks one at a time, beating well after each is added. Mix in the semolina, gradually.

Semolina. Another curious element of the recipe. Most cakes in the European tradition use flour as the main component and so do the other cakes in Ada’s recipe book. Semolina flour is made from durum wheat, the wheat that’s used to make pasta and couscous. In Indian cooking, though, it’s often used to make cakes. And so the Christmas cake tells more of Sri Lanka’s history. This time it’s about Moghul empires in northern India in whose courts those central Asian conquerors ate sweet cakes made from their native wheat. Like court food in other cultures, these cakes transgressively moved beyond the palace into the home. From kitchen to kitchen the sweets travelled south, crossing the Palk Strait separating Sri Lanka from India, into the Tamil dominated north of the island. Durum wheat was displaced with the coming of the Europeans bringing their alien winter wheat from Europe. I like to see the semolina in the Sri Lankan Christmas cake as a subtle culinary act of enduring anti-colonialism.

But I am getting ahead of my nine-year old self again. All I know as I sit cross-legged on the table, wedging the basin between my knees is that the semolina is making it harder to stir the batter.

Then add the fruit, cadjunuts, and spices.

That’s what the Europeans came for. Spices. Cinnamon in particular from Sri Lanka. For centuries the spice trade into Europe was controlled by Arab merchants. They carried the spices up through the middle east to Venice. The Venetians on-sold the spices into the courts of Europe at exorbitant prices. It was the Portuguese who first decided to break this monopoly, sending Columbus off, in the wrong direction as it happened, to find the spice islands of the east. They were more successful with Vasco de Gama who went south and around the bottom of Africa and ended up in Calicut on the south west coast of India. Then the Dutch arrived with the first global corporation, the Dutch East India Company and displaced the Portuguese. Neither of these two nations sought to rule Sri Lanka: They set up trading posts and entered into marketing contracts with the rajahs of the country. When the British arrived, they were in the full flush of empire building through military force and ownership. Sri Lanka became a British colony and remained so for a century and a half until 1949.

Lastly, the brandy, rosewater, bees honey and syrup (vanilla and essence of almonds).

The whites of 8 – 10 eggs beaten up to a stiff froth. Ready a tin – not too high – lined with 2 or 3 folds of white paper well buttered. It is best to have about six folds of paper at the bottom. Pour the mixture into the prepared tin and bake in a moderate and steady oven from four to five hours.

Is this when I become a cook? Or is it when I hang around Rosalind’s kitchen taking a turn at grinding spices, tasting the curry gravy and offering suggestions for improvements – more salt, more chilli, more dried fish. Or when as a teenager in Australia I come home from school and make a ham, cheese and tomato jaffle as a snack. Or my first paid catering job preparing a Sri Lankan feast for a friend’s birthday. I don’t know. I only know that somewhere along the way this millennia old practice of transforming combinations of plant and animal matter into fuel for the body and soul became as natural and necessary as breathing.

Ada and Rosalind take the cake across the road to my uncle’s for baking. We don’t have an oven. Back on the verandah, I run my finger around and around inside the basin, coating my finger with the deliriously complex flavours melded into something so much more than its parts.

Ada and I are Sri Lankan Burghers, a hybrid race: a mixture of Portuguese, Dutch, Sinhala and Tamil. We are the westernised middle class that worked for the British colonial administration in Sri Lanka. You can read the Christmas cake as a methaphor for we Burghers if you like. I am too busy licking to philosophise.

When Sri Lanka became independent, Sinhala nationalism took hold. We burghers were clearly not welcome any more. I can understand that. The Burgher disapora settled in Britain or its former colonies – Canada and Australia mainly.

It’s in Australia that the answer comes to the question what is chow chow. It’s choko, the fruit of the vine that defined that time of my arrival in Australia as it grew wild over the outside dunny. How appropriate that this multicultural cake should all the time have contained in it an ingredient from the future, a future in which another cultural strain would be added to the hybridity that is my nature and now the nature of my children and grandchildren.

It is mid-day in early December some time in the 2000s. The summer’s heat is not oppressive with humidity here in Australia as it was on a day in December 1959 in Sri Lanka.

First prepare the fruit. Stone and cut the raisins in three or four pieces; wash and stem the sultanas. Wash, pick and dry the currants…

You can hear the podcast here.